The Carters were very much a part of the 1955 Montgomery Bus Boycott Movement and subsequent civil/voting rights movements as financial contributors and as a part of the “people’s transportation system.” 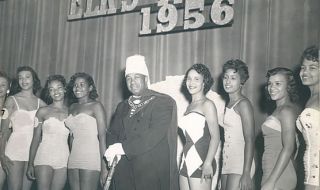 Richard Carter, Sr. (1914-1977) married the former Bertha Mae Jenkins (1912-1998) of Savannah, Georgia in 1930. The couple resided in Montgomery as a family with five children. The couple always functioned as partners in several family-businesses, viz, the dry cleaning business in two locations, and later an expansion to include a washeteria.

The major business site, "Carter and Son (Richard Carter, Jr.) Dry-Cleaners" was located at 765 Dorsey Street in the heart of a thriving Black business district. The cleaners was a few doors from the Montgomery Improvement Association (MIA), the organization that spearheaded and directed the successful 1955 Montgomery Bus Boycott Movement. The Carters were very much a part of this and subsequent civil/voting rights movements as financial contributors and as a part of the "people’s transportation system."

Bertha Carter served as PTA president for 13 years at Loveless Elementary and Junior High School, where her children attended public school. She went on to distinguish herself as the first Black, female talk-radio hostess (1967) for WRMA-AM radio. The broadcast was entitled "It’s A Woman’s World."

The Carter Family was a close-knit family and as a family played a prominent role in the church, the prestigious Old Ship AME Zion Church, the oldest Black church in Montgomery and the first site for the Colored Alabama State Normal School, now Alabama State University.

The Carter Collection is replete with candid photographs of social settings in the Elks Nightclub; of various Elks programs, especially for youth; church settings/programs; and of Rosenwald school buildings established for Black children in rural Montgomery County.

The Richard and Bertha Carter Photograph Collection captures Montgomery’s Black life and culture in the family, the church, education, social, civic and fraternal settings, circa 1950-1960s. There are 103 photographs in the Collection. Additionally, the collection has small artifacts, representing leadership in the Elks Fraternal Order. There are some notes and 1 speech written in Bertha Carter’s handwriting.