Gwen Patton has been an activist most of her life. From her involvement with Civil and Voting Rights to student activism to her political involvement, Gwen has always advocated social, political and economic change. 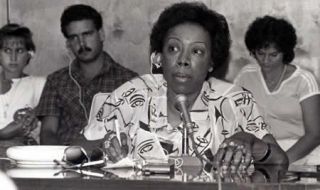 Gwen was born in Detroit, Michigan on 10/14/43 to Mr. and Mrs. Robert and Jeanetta (Bolden) Patton. Robert, a union representative with United Auto Workers Union, and Jeanetta, a graduate of Lewis Business College, encouraged Gwen and her brother, Robert, Jr., to take an interest in schoolwork and to learn as much as possible. They were instilled to have purpose and meaning in life, which included a commitment to do work to "uplift the race." The Patton family on both sides had a long record of being race people. "It was a ritual in our family for us to read the newspapers and then discuss what was happening in the world and what roles we were to play to impact our lives for the better," Gwen said.

Following the death of her mother when she was 16 years old, Gwen moved to Montgomery to live with some of her relatives. She had visited her relatives in Montgomery many times during the summers. As she traveled South, she recalled Cincinnati as the end of freedom, referring to having to change cars and ride in the front of the train so Black folks would be closer to the coal and steam engine. She said, "You could not ride into Kentucky in integrated cars. It was like coming out of the free states and into the slave states. Being close to the engine was a sign that Black folks had to be put into their 'place'."

Gwen vividly remembers an incident that occurred while visiting Montgomery. She was 9 years old. Grandmother Bolden after church on Sundays would put the Patton siblings and their first cousin on the bus for their weekly bus ride to the end of the bus line and return. The children were told to ride on the back seat and look out the large window. "Nothing could be more fun than to see the scenery backwards," Grandmother told the children. One Sunday afternoon, Gwen decided that they should stop and get ice cream cones. Gwen was also thirsty. After purchasing a paper cup for 3¢, Gwen sat down on the soda fountain stool to drink her water. The soda fountain jerk rudely told Gwen to "get up off the stool" and called her a "pickaninny." Gwen responded by looking at the waitress straight in the eyes and by pouring the cup of water on the counter. When Gwen relayed the story to her grandmother, nothing was said, but immediately her grandmother hugged her and said, "You will never ride the bus again, and no one will ever insult you again. You are a princess."

During subsequent visits to Montgomery before her mother died, Gwen worked as a teacher in her paternal grandparents’ home which served as a "citizenship school" to teach prospective Black voters how to fill out the literacy test, the prerequisite barrier that always denied Black people their right to vote. Gwen became totally immersed in the civil/voting rights movement of which her relatives on both sides were ardent supporters for the quest for first-class citizenship as symbolized by the vote.

In Montgomery, Gwen graduated with high honors from George Washington Carver High School. Later, as president of the Student Government Association at Tuskegee Institute, she successfully made the historical and cultural connection between African-American and African students. She coined the phrase "scholar-activist" and urged students to work in the community for social, political and economic change. She was Direct Action Chair for the Tuskegee Institute Advancement League, and she, along with other students, planned strategies to desegregate Macon County, in which Tuskegee was the county seat, in all areas, especially in employment. Though her maternal grandmother’s rental home was the "freedom house" for Dr. MLK, Jr.’s Southern Christian Leadership Conference, Gwen had greater affinity with the Student Nonviolent Coordinating Committee, her peer group, which was comprised of college students like her.

On the eve of the first "Black Power" conference in the country on February 9, 1967, held on Tuskegee Institute’s campus, Gwen was in a mysterious car accident while in route to Montgomery to take a friend to her maternal grandmother’s home as a stop-over before boarding the plane to Canada to avoid going to fight in Vietnam. Gwen had became an anti-draft counselor, and several of her relatives supported her efforts. The accident left Gwen with one leg shorter than the other, but she is able to ambulate with corrective shoes.

Gwen was one of youth founders of the Alabama Democratic Conference (1960), the Black political wing of the state Democratic Party, one of the founders for the Alabama New South Coalition (1986) and was one of nine Jesse Jackson presidential delegates elected in 1984. Earlier on Gwen founded the National Anti-War, Anti-Draft Union (NBAWADU) Against the War in Vietnam (1968) and the National Association of Black Students (1969). Because of her civil/voting rights activities, she was targeted by the FBI’s Counter-intelligence Program (COINTELPRO).

Never deterred, Gwen went on to make contributions in the educational world as a college professor throughout the country. Gwen was a co-host for Alabama Public Television program, "Harambee." She is a frequently interviewed about political development and analysis by national and international media (print, radio and television). Dr. Patton, was the Special Collections on Montgomery Pioneer Voting Rights Activists archivist at Trenholm State Technical College in Montgomery, Alabama. "It is a labor of love. Nothing is more precious than for us to preserve the papers and records of our forebearers who laid the groundwork for us to continue our struggle for self-respect and freedom. Continuing this legacy is the true essence of my life."